※ If you receive the product in Japan you will need sales tax.

What is sepia ink?

The word "sepia" is the Latinized form of the Greek σηπια which means "cuttlefish" which were a favorite food of the ancient Greeks and abundant in the shallow waters off the cost of Athens, Thessaloniki and across the Greek-speaking Mediterranean. "Sepia" also refers to the reddish-brown color of the ink excreted by the cuttlefish as a defense mechanism when the creature becomes frightened. So the ink, which is also edible and sometimes used to color and flavor pasta in southern Italy, was a natural byproduct of the ancient fishing industry and prized by the ancient, literary cultures of Greece, Egypt, Rome and commonly used as an ink source right up until the turn of the twentieth century. Socrates, Plato, Aristotle, Solon, the Four Evangelists who wrote the Christian Gospels, Leonardo DaVinci, Rembrandt, Beethoven, Marie Antoinette, Napoleon -- sinners and saints -- all wrote with sepia ink which they would use with a variety of dip pens made from reeds, wood, feathers or metal. Some of these documents written with sepia ink which still exist today are over 2,000 years old!
In 1920, British potter Bernard Leach (1898-1972) came to Tottori, Japan with a bottle of French sepia ink. A friend of Mr. Leach, Dr. Syoya Yoshida, together with Professor Takeshi Kawasaki of Tottori University became interested in sepia ink and developed a version for production and sale in Japan. In 1936, Tottori Sepia, Inc., was patented under the name of "Sepia Ink" and sold until 1960. The ink was sold as a powdered concentrate meant to be mixed with water. 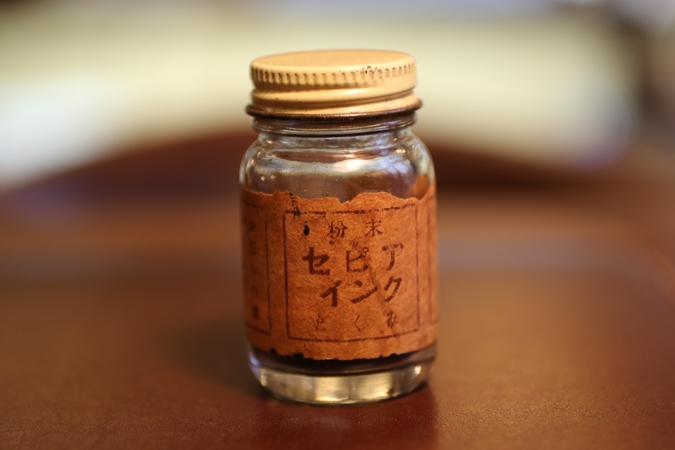 However, despite being a natural pigment with excellent light fastness and water resistance, the advent of fountain pens meant the decline of the use of sepia ink because the particles of the ink clogged the capillaries of fountain pens.
In 1970, Mr. Masaaki Yamamoto, the second generation to lead our firm, taught to make sepia ink by Dr. Yoshida and Professor Kawasaki sought to revive the production of sepia ink.
In 1985, Ryo Yamamoto, the third generation to lead our firm, extracted the ink from the cuttlefish under the guidance of Masaaki Yamamoto, creating an ink with a chemical stabilization process. However, the capillary clogging effects of the ink -- precisely the reason why sepia ink had been abandoned -- remained problematic. In 1995, Mr. Ryo Yamamoto began a decade long study, consulting paint specialists, on how to process ultrafine particles culminating in a 2005 limited edition of 100 bottles of sepia ink with a special cedar wood bottle cover. 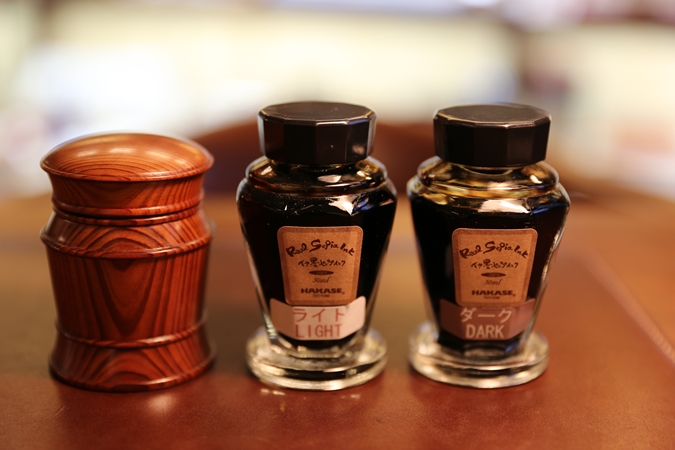 We now have developed two varieties of sepia ink: dark and light. The light sepia ink provides for a more dry ink flow from the pen. The dark sepia ink provides a wetter ink flow. This is a way to adjust the wetness of the nib without actually adjusting the nib!
Our revised version of sepia ink is made by hand, no more than 20 bottles per month, and provides the same excellent resistance to light and water of it's ancient predecessor without the unfortunate problems of clogging which have been solved by processing the ink into ultrafine particles.
Because we can only make 20 bottles per month, our sepia ink is occasionally out of stock and generates a short waitlist. Don't worry. We'll post your shipment as soon as we make more. Included with our ink is a Material Safety Data Sheet (MSDS) in English.

· It is necessary to dry for several days in order to obtain water resistance effect. About 3 days.
· Please do not mix with other inks.
· If you do not use the fountain pen for a while, drain the ink and wash it by repeatedly sucking tap water in the same way as using a converter to suck ink.
· Please note that it will be hard to fall off when clothes and ink stick.
・Since organic substances containing nitrogen such as amino acids and proteins have been removed,It doesn't smell like edible squid ink or rot, but You may be able to smell the alkaline aqueous solution that remains slightly (1% or less) during the manufacturing process.